We were in the bus for a long time. It was a great trip. We saw lots of family and friends (my Aunt June woodpeckered me!). But now we're home. Actually, we're in a new home right next to our old home. Becca and I are sharing a room now. I like it. We have a lot of fun there.

I want a Leap Pad like Becca has, and a fish...

I don't wash my hands in the toilet anymore...

I like playing hide and seek with anything that belongs in the lower cupboards...

I understand velcro and how not to use it...

I like to give people and stuffed animals biiiiiig hugs...

My feet get dirty when I don't wear shoes, and it tickles when Mommy or Daddy wash my feet...

Here's a picture of Becca and me on the bus: 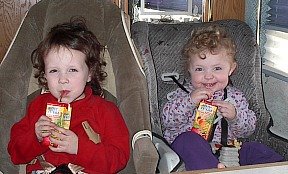 Just got done with a rousing game of Chutes and Ladders with Mommy, Daddy, and Becca. I finally won this time... The first three or four times I was trying to figure out the object of the game, 'cause nobody bothered to read the instructions out loud... so I had to figure it out on my own. I have a system, now... I should be able to win every time from now on.

See, Daddy always says what numbers I should try to get, so I take the spinner as far away from the game board as possible, and spin it over and over until it stops on the number I want. Then by the time someone comes over to take the spinner from me, I have the right number, and I never land on a chute! I'm just worried that someone will figure it out, and I won't be able to cheat anymore.

In other news, I definately much prefer walking to crawling. I'm fast now. I can even run for a short while before I fall down and bonk something. Today I walked outside on the walkway, and I walked from the church to the parking lot (Mommy held my hand).

I have nine teeth... and three more on the way. Mom said they weren't coming in the right order, but close enough, so she's not worried about it. I brush them with my tigger toothbrush.

I had a birthday a couple of months ago. My friend Madaline had a birthday the day before me. We were in the hospital at the same time. It was pretty fun. I got my own cake, and I ate a few handfuls of cake, but I guess I didn't do it right, 'cause after I was done eating, Mommy said I wasn't messy enough, and then she took frosting from my beautiful cake, which I had worked so carefully to keep mostly intact, and she smeared it on my face! Then she took pictures!!! The horror! (Actually, I thought it was kinda funny.)

I have decided I now like toys with buttons and such, things to climb on or under, and anything huggable. Mommy and Daddy each got a huggable bear for Valentine's day... I hug them both as much as I can.... soooo soft!

I grew out of my last pair of shoes pretty quickly, so Becca and I got new shoes. Becca got red converse-style hightop sneakers, and I got some white sandals... 'cause I don't like to wear socks.

I have decided that two naps a day is a waste of my time... I'd much rather have one long nap.

Daddy updated my picture page at this link and he said he would update Becca's next Sunday. Everyone laughs at the picture of me with the big glasses... I thought I was stylin'... I guess not.

I went on three airplanes and then saw Gramma and Grampa and Aunt Diane and more of our family and friends out in a place called New York. I'd never been there before, well, I have vague recollections of being in Mommy's tummy there for a while, but it was nice to go there. I got my first pair of new shoes and they really help me stand up. They taste good, too! They have that new shoe flavor. Mmmmm. I think I might try walking in them soon.

I was a pumpkin for Halloween, and Becca was some kind of dog. They tell me I was cute.

I have five teeth now.

Mommy and Daddy keep trying to figure out what to get me for Christmas, but it's hard for them because I don't really play with toys too much. I mostly like to crawl around and check things out. I think I would like a tunnel. I'll have to see if I can get them to build me one. I saw a hamster cage that had one. If I could get a big one like that, I'd spend a lot of time going through that. I might even like a hamster wheel or one of those rolling balls, as long as somebody doesn't kick it.

I like to dance and sing and clap my hands, too. My favorite song is "Pat-a-Cake".

I clap for Becca every time she goes potty. She's a big girl.

Well, I've finally figured it all out. I know how to get wherever I want to go. I can either crawl there, or climb there, or squirm my way out of places. It's an incredible feeling of freedom... not just the mobility issue, but food as well. I'm not ashamed to say it, I LOVE FINGER FOOD!!! Whoever invented this stuff has my utmost respect. It's sooo much better than formula, and baby cereal. I wish everything tasted as good as food. It helps that I have three teeth now. Mommy says I'll have four before too long.

I feel like every time we step outside the house we're in a new place. It took me a while to figure it out, but appearantly, our house has wheels. At least there are some descent places to nap in there... and Becca and I can share our toys and listen to music. We stay at Grandma Jean's house a lot, too. I really like the toys there. A lot of them are big, and I can climb on them.

Mommy and Daddy and Becca threw a surprise birthday party for me a couple of months ago. It was really a surprise, 'cause my birthday's not until the end of December. I think it was mostly 'cause they wanted to give me the exersaucer they bought before I was too old to appreciate it. Singing "Happy Birthday" was Becca's idea. She gets some pretty kooky ideas from time to time... I love her, she totally cracks me up... but for some reason, she won't let me play with her dollhouse.

I have been using my car-seat on a more regular basis lately. I've taken it several places with me. I took it to a motel, and I took it to a festival, and to Uncle Jim and Aunt Cindy's. I took it to a lot of Daddy's concerts... I also took my double stroller that Becca and I share. I like my car seat most of the time. I sit where I can see Becca when I'm in the car. Becca makes me laugh, she's silly.

Mommy bought me a really cool toy that I can play with while I'm lying down on my back. It has a place to hang toys from so I can pull on them and touch them and squeeze them. I like it a lot, but sometimes I'd prefer to explore... I roll over on my tummy and try to crawl across the floor, but I haven't figured out exactly how to get anywhere just yet. My tummy is too heavy for my arms, so I just wriggle around until I've gone a few inches, then I roll back over and wriggle around on my back... That's much easier. I'm tired now, I think I'll go have a nap.

So I started eating cereal the other day. I took one bite and looked deeply into that spoon, wishing I could say, "Where have you been all my life?" I devoured an entire teacup full of it. I've done that every day since then.

Becca laughed at me, 'cause I dribbled a little bit. I laughed at her because she totally cracks me up when she laughs. She has this high-pitched squeal then she chuckles and bursts into giggle-fits. I have a more deep and husky sounding laugh... at least that's what Mommy tells me. I also get tears in my eyes when I get laughing too hard.

Becca let me use her old doorway bouncer this week, too. I like it, but I prefer to lean back and relax. I'm not too anxious to jump around or anything like that just yet. I also have a walker that I sit in sometimes. I like to have a small pile of toys on the tray. It's neat 'cause I can see all around me better.

The craziest thing happened recently. I was sitting in my stroller with Becca, minding my own business, when BAM! There’s a big hairy critter sitting in my lap. I just about fell over laughing. It turned around and laid down curled up right there on my lap. I grabbed ahold of it’s fur and pulled to see if I could get it to sit closer… I wanted to hug it, it was so soft. It purred, and snuggled with me. It was very friendly. Then it got down and sat on the ground. We went on with our walk.